From Wiki in Space
Jump to: navigation, search

The Docking Computer is the screen you interact with to get permission to undock. It is located in the airlock of each station. (On certain stations it is also accessible from rooms that overlook the airlock.)

If you need to pay a fee to undock, the screen will display that and allow you to pay it. The fee depends on the wealth of the station. For example, Leo stations are often more expensive to undock from than stations in Magella. The fee may also be increased to represent recent fines issued by Authority vessels.

You must own a space legal ship to undock. Your starting shuttle is not rated for legal flight in the Apollo cluster because it is 44 years old.

The docking computer also allows the player to change their name and rename their ship in a different tab. Doing so costs 200c. 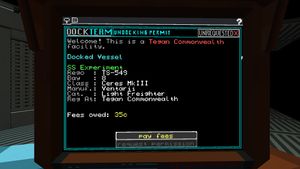 A Docking Computer before fees have been paid or undocking requested 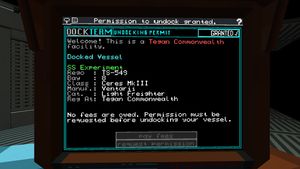 A Docking Computer after permission has been granted 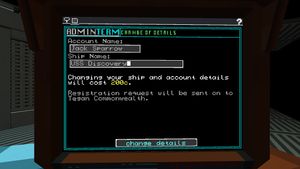 A Docking Computer being used to rename a ship and owner
Retrieved from "https://oiswiki.sysadninjas.net/w/index.php?title=Docking_Computer&oldid=1384"
Category:
Station Interface